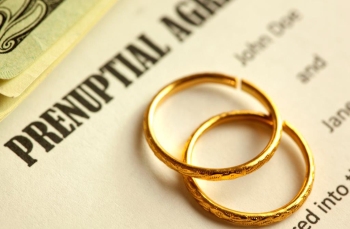 Marriage is supposed to be that divine moment that begins with so many good, sincere, and loving things to say about each other and the euphoric intent of spending the rest of your lives together in wedded bliss. The church believes that all marriages are made in heaven, but then, so are thunder and lightning. The unfortunate reality is that marriage can become the most advanced form of warfare whereby, according to most statistics, about 50% of all marriages end in divorce. It is something to give you pause if you are bringing a lot of assets and property to the marriage and even greater pause if it is your second or third marriage and you have children substantial assets from a prior marriage.

And what is marriage? Although 13 states have common law statutes, all 50 states have marriage contracts. And exactly what is a marriage contract? Simply said, it is an agreement between 2 parties that agree to love and trust each other until death do they part. Unfortunately, when the trust is broken and divorce is inevitable, it gives courts the mechanism to enforce emotional and equitable fairness. So if most couples, prior to marriage, are happy and satisfied to sign a marriage contract, what is their fear of signing a pre-nuptial agreement (Prenup)? The purpose of a Prenup is typical to prevent assets or individually owned property from ever becoming marital property.

What Are Prenuptials For?

Unlike a marriage contract that characterizes all of the blissful, loving, and joyful decisions to marry, a Prenup often feels more like a painful thorn in the sides of one or both partners. Basically, a Prenup states that "although I love you unconditionally, our love is conditional and if we divorce, what is mine shall remain only mine and only what we acquire during the marriage is ours." It may sound harsh but consider the following example.

Four years following the clamorous and horrific divorce from her first husband, Alice fell head over heels in love with Joseph and they decided to marry. She brought to their marriage 2 minor children from her first marriage, a successful career and $650,000 in assets that included a furnished home, a substantial 401k and IRA, luxury car and bank accounts. Joseph brought to the marriage only a decent job and his undying love for Alice and her children. It was no surprise to Joseph when Alice asked him to sign a prenuptial agreement should their marriage fall apart as did her first.

Consider the Future of Your Estate During Marriage

Whether you are contemplating your first, second or third marriage, if you are bringing a substantial amount of property and assets to a marriage, you should discuss your estate with both your fiancée and an estate planning attorney in Orlando before you say "I do".
Categories